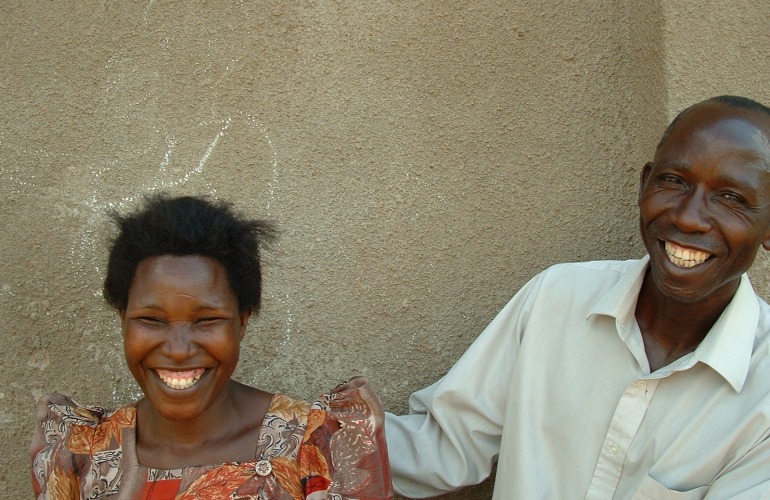 Hands up if you donate to charity? And does anyone here sponsor a child? Have you ever wondered what actually happens with your donation – I mean there are so many reports of money going astray – do you think it actually gets to where it is needed or are you a bit suss? I used to wonder but too I found out for myself and tonight, I’d like to tell you about what I saw.

Back in 2001 I had planned to travel to Africa for an extended holiday and at about the same time I started to sponsor a little Ethiopian girl through World Vision. I decided to put two and two together and visit my sponsor child. I thought that it would be an amazing experience and bring me closer to ‘Africa’. I had to go through the full rigmarole with forms to fill out and a full police check and then as the time of departure got closer I realised I wasn’t going to make it to Ethiopia so I arranged to visit a project in Uganda instead.

Uganda is one of those places that people warn you about but because I’d been quite young when much of the trouble occurred I was oblivious to any real dangers and to me it’s one of the most beautiful countries in the world. It rests on the equator near the middle of Africa but it’s on an elevated plateau so the climate is perfect – 27 degrees, it’s covered by lush rainforest, I remember staying at a gorgeous crater lake with monkeys playing in the trees and a hippo swimming across the lake and it’s home to the loveliest people I’d ever met.

But behind the smiling faces there has been and still is a lot of suffering. Between 800 thousand and 2 million people perished during the dictatorship of Idi Amin and the civil wars, tribal killings, and famines that followed.

Ugandans have a life expectancy of only 53 years (ours is 81) and there is an infant mortality rate of 79 per 1000 (ours is 4) and only 60% of people have access to clean water so it is pretty clear why World Vision is there. Uganda’s children are in desperate need of improved educational opportunities to help them escape the cycle of poverty and open up a brighter future.

The first thing I noticed when I arrived at the World Vision head quarters in Kampala was how crowded the offices were. I don’t know what I’d been expecting – maybe a bunch of rich white people living it up in luxury on my money but there must have been 15 local Ugandans stuffed into one little room. There were piles of paper everywhere and an organised chaos buzzing through the air. I was introduced to the team and they all kept thanking me. I felt so weird because I didn’t feel I was doing that much other than donating $40 a month.

I hopped in a 4 wheel drive with 2 of the staff who showed me around for the day.  We drove for about an hour and a half before we came to the first stop which was a visit with a project where I met a few families with small children and got shown around their properties. Just so you know, when you sponsor a child, your contributions are pooled with donations from other sponsors of children in the same community as where your child lives. So your child receives health care, education, nutritious food, and the entire community benefits from access to clean water, agricultural assistance, medical care, and more. That way no one misses out.

When I met the families they explained to me how it all works.  Firstly the families have to prove that they won’t waste the World Vision support and could be responsible. They do this by building a shelter for a cow. When they have done this they are given a cow which changes everything for them and it really is amazing what a difference one cow makes.

They get milk from the cow which means their children get more nutrition. Any excess milk they get they can sell so they have some income, then they use the urine and manure to fertilise their garden so their fruit and vegetables grow and they’ve got more food and potentially more income if they have excess and can sell. When the cow is ready they breed it and give the calf to the next family and so the cycle goes on and on. It’s so simple but so smart and I was really impressed.

We then went out to a local restaurant. There was some old meat hanging from a tree out in the sun with flies buzzing around and this is what got cooked up for my lunch. It was a really tasty stew so long as I didn’t think about what I had just seen.  I guess we take refrigeration for granted. These people really have so little compared to us. Throughout lunch everyone I met continued to thank me.

In the afternoon we visited some building projects and the finale of my day was a visit to a school where they were having a celebration. There must have been about 200 kids in a range of ages in a massive classroom and I was asked to stand up and speak to them and tell the kids that their sponsors cared about them.  It was my first real public speaking and I really had been put on the spot so I was very nervous but managed to say a few words. The kids were amazing. They did a dance for me and again everyone just kept on thanking me and treating me like a rock star. I felt like a fraud because all day I felt like I was getting all this praise but I didn’t deserve it. It was amazing really.

After that we drove back to Kampala and I said goodbye to my gracious hosts. It really was an eye opening day and I came away thinking that my money really was getting put to good use. A few people have said to me that I was probably taken to a kind of ‘show home’ style project where it was all happy and rosy and that it wasn’t all real but I’m convinced it is. To have all those people coming up to me (especially the children) and being so grateful really could not have been faked. It was incredible. I’ve also heard that about 80% of funds that we donate get to the people instead of chewed up in admin and from what I saw in the office it didn’t look like they were splurging money. I’ve also got friends who’ve worked in the World Vision Melbourne office and they too, say that money is not wasted.

So I hope that tonight I’ve been able to reassure you that your money does get to those in need.  As I said earlier, Ugandans have a life expectancy of only 53 years, an infant mortality rate 20 times higher than ours and only 60% of people have access to clean water . And they are not the only ones.  Right now in Somalia, Kenya and Ethiopia 12 million people are affected by the worst drought they’ve seen in 60 years.  They are $450 million short of food supplies.  So if you are thinking about donating to a cause like this or if you already sponsor a child, I would like to reassure you that I think your money is getting to those in need and you are helping to break the cycle of poverty.

View all posts by Polly Jane